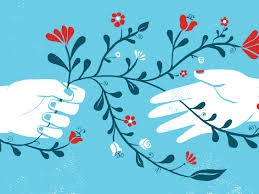 People must love in humility.  By so doing they will find personal freedom, comforting joy, while caring for others on their spiritual journey.  These are qualitative moments because they will be embracing their true life’s calling.  With pureness of living they will be like missionaries in a flourishing garden.  Henri-Frédéric Amiel (1821–1881), a Swiss moral philosopher and critic said, “There is no respect for others without humility in one’s self.”  This could be achieved by having an open mind about love.  However it’s wise to live under God’s protection while engaging with others in the community.

James A. Baldwin (1924–1987), a novelist, essayist, and playwright wrote, “The question which one asks oneself begins, at least, to illuminate the world, and becomes one’s key to the experience to others.”  With this self-introspection people have to be free from guilt by having inner freedom.  Christians experience the joys of evangelizing and touching lives.  It’s the Holy Spirit within us as we express our God-given gifts to people.  This message is found in the abiding truths of his Word.  It bears witness to believers’ affairs as they live.

To be faith-filled means experiencing a quiet joy.  Most Christians are happy people who show their happiness to those they meet.  They sing praises, shine forth their light, and are excited about life.  By being touched by the supernatural hand of God they have lives of abundance.  These blessings come by prayer and perseverance in their daily lives.  Albert Einstein (1879–1955), a German-born theoretical physicist wrote, “The true sign of intelligence is not knowledge but imagination.”  A Christian’s belief is in faith. He or she puts their thoughts in actions and works.  Aesop (620 BC–564 BC), an ancient Greek fabulist said,” “Gratitude is the sign of noble souls.” Christian believers live by giving thanks, and praise to God for his blessings.

St. Teresa (1910–1997), a Roman Catholic religious missionary said, “Let us touch the dying, the poor, the lonely and the unwanted according to the graces we have received and let us not be ashamed or slow to do the humble work.”  St. Teresa and the Sisters of Charity found great joy by working with the poor.  Their mission continues to be a witness to the poor people of everyday life.  They knew human frailties and are willing to do their best to relieve suffering.  Sisters of Charity brought dignity to forgotten people, and their main focus wasn’t only the downtrodden, but exploited people.  To these sisters money and power are false idols, and their answer was to live simply.  The distribution of material wealth to the least among them mattered.  This was what they taught about compassionate living.  By performing such deeds Christians are contemplative.  Max Lucado (b. 1955), a bestselling Christian author and preacher said, “The meaning of life.  The wasted years of life.  God answers the mess of life with one word: ‘grace.’”  In the end it isn’t the dirt and squalor, deprivation, or laws, but God’s ‘grace’ that means everything.