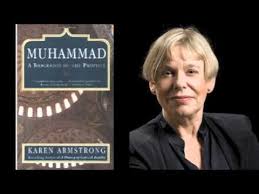 Muhammad: A Prophet for Our Time by Karen Armstrong is a rather compelling biography.  Prophet Muhammad (C. 570–632 CE) was born in Mecca and preached “surrender” (Arabic word for islam) to God.  He experienced conflicts in his ancestral home with the city ruled by Quraysh.  So he migrated to Medina whereas Muslims he dwelt with warring tribes.  There he recognized the “People of the Book” – Jews and Christians, and were supported by Bedouins.  Muhammad taught his adherents to imitate the way he “spoke, ate, loved, washed, and worshiped.”
While living in Medina he made alliances, and married daughters of chieftains from different tribes.  These women meant a lot to him, and he received revelations concerning their rights that are verses in the Qur’an.  But these proclamations caused animosity among some of his male followers.
Muhammad however stuck by these divine messages, and the community adhered to his teachings.
As a leader of the Muslims, Muhammad led raids and pilgrimages to Mecca.  Eventually he succeeded with his Medinese followers in bringing peace as they reached the Kabah.  Despite his successful return to Mecca where he gained more converts he decided to live in Medina.  When Muhammad died he was succeeded by caliphs.  Islam later ended up being splintered into sects viz., Sufi, Sunni, and Shi’ah.