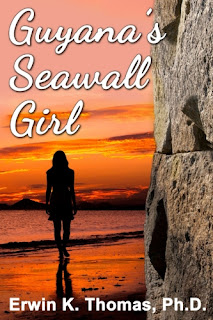 This biographical novel Guyana’s Seawall Girl paints a picture of love that triumphant for three Guyanese nationals.  In the 1950's to 1980's this story occurs against the backdrop of the Republic of Guyana, the West Indian Islands, and America.  It tells about Kevin Thompson and his relationship with two women.  One was Gwen Philips, who was on a roller coaster ride.  She has had affairs with different men, notably a professor at the University of Guyana (UG), and with Kevin.

Kevin, who was a teacher with Gwen at St. Cyril’s Anglican School in Georgetown was fascinated by her charm and intelligence.  Buffeted by local political and cultural intrigues their relationship was unsettling and unpredictable.  But Kevin was soon drawn by educational opportunities to study mass communications in the United States, and Gwen was left behind in Guyana.  While in America he had an affair with Susan, a British blonde, and found their relationship going nowhere.  In the 1960's and early 1970's, while at school in Oregon, New York, and Missouri pursuing undergraduate and graduate degrees he was caught up in America’s social, and cultural revolution.  He however never forgot Gwen with whom he had a sexual encounter on May 26th, 1966 on Guyana’s Independence Day celebrations near the seawall.

This seawall meant to be symbolic of life in the novel prevents the Atlantic Ocean from flooding the low-lying coastland of the East Coast.   Kevin wished to do right with Gwen, although while pursuing studies in America he married Lynn, a white American of Irish heritage.  Unknown to her he continues writing Gwen whom he would see during trips to the region.  Kevin though never stopped loving Gwen.  Eventually he taught at three universities, had an American family, but couldn’t forget about her although married to Lynn.  Meanwhile Gwen became involved in a relationship with UG’s Professor Harry, who refused to leave his wife.  With these heart-aches she was persistent, struggled over Kevin’s love, and was troubled by Professor Harry’s advances. But with all these problems she was still able to continue teaching at St. Cyril’s, and completed an undergraduate degree in languages at UG.

Gwen, who lived under the watchful eyes of her parents, with Billy and Nora as their mutual friends, determination paid off after she left Guyana’s shores to further her studies in America.  While in the United States she visited Kevin and Lynn in Virginia Beach, attended Boston University, and eventually earned a doctorate in linguistics at the University of Washington, Seattle.  It was while living in Seattle she met and married an American naval officer, had a child of her own, and presently lives happily with her family in Washington.