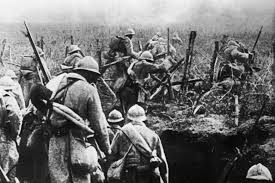 The Lord said that we must not go up to fight against our kindred (2 Chr 11:4).  “Too long have I had my dwelling among those who hate peace.  I am for peace; but when I speak they are for war” (Ps 120:6-7).  He however silenced the roaring of the seas and waves, also the tumult of peoples (Ps 65:7).  A president of the United States Dwight D. Eisenhower (1890–1969) said, “I hate war as only a soldier who has lived it can, only as one who has seen its brutality, its futility, its stupidity.”

Gary Zukav (b. 1942), a spiritual teacher and author wrote, “We are becoming able to see the pursuit of external power for what it is and the futility of trying to escape the pain of powerlessness by changing the world.  When we look inward, not outward, we can dismantle the parts of our personalities that have controlled us for so long – such as anger, jealousy, vindictiveness, superiority, inferiority.”  Finding answers to war should start with our self-examination.  We’ve to know our strengths and weaknesses to have a balanced life.  This is true not only for common people, but for presidents and prime ministers, who govern nations.

People’s conflicts show the presence of our sinful nature.  A founder and teacher of desiringgod.org and Chancellor of Bethlehem College and Seminary in Minneapolis, Minnesota, John Piper (b. 1946) said, “God created a good world that was subjected to futility because of the sinful, treasonous choice of the first human beings.”  This legacy that was passed down through the ages has shaped people’s behavior.  We should therefore embrace the teachings of the scriptural narratives to change our attitudes for the betterment of society.

Some people hope words are enough to subdue, and enlighten those opposed to the light.  A Chinese general, military strategist, and philosopher Sun Tzu (544 BC – 496 BC) wrote, “The supreme art of war is to subdue the enemy without fighting.”  Tzu must have been thinking about winning wars by words, and not by physical force.  Yet wars of words can be as devastating like weapons.  Some believe that psychological warfare does damage for generations to come.

A Russian writer Leo Tolstoy (1828–1910) said, “The two most powerful warriors are patience and time.”  These two gifts form the basic framework in pursuing peace.  Such an alliance must not be rushed into, and forged without understanding.  President John F. Kennedy (1917–1963) wrote, “Mankind must put an end to war before war puts an end to mankind.”  People know what a confrontation between the superpowers will mean in an age of nuclear weapons.

Today nations wage war against nations.  Herbert Hoover (1874–1964), a president of the United States said, “Older men declare war.  But it is the youth that must fight and die.”  This lesson is known for those leaders who are belligerent. So the question should be asked, “Who will die for their nation’s causes?”  And the answer is always, “Our sons and daughters, who are the innocent ones.”