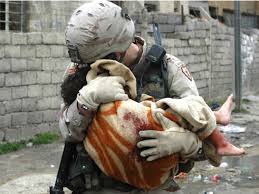 We must love in humility.  By doing so you’ll find personal freedom, comforting joy, while caring for others on your spiritual journey.  These are qualitative moments because you’ll be embracing your true life’s calling.  With pureness of living you’ll be like missionaries in gardens full of life.  Henri-Frédéric Amiel (1821–1881), a Swiss moral philosopher and critic said, “There is no respect for others without humility in one’s self.”  This could be achieved by having a clean mind, and a certain quality of love.  Be sure to live under God’s protection while engaging with others in your community.

James A. Baldwin (1924–1987), a novelist, essayist, and playwright wrote, “The question which one asks oneself begins, at least, to illuminate the world, and becomes one’s key to the experience to others.”  With such self-introspection people have to be free from guilt by experiencing inner freedom.  Christians know the joys of evangelizing and illuminating lives.  It’s God who reigns within us as we express our God-given gifts to people.  This message is found in the ever-living and abiding truths of his Word.  It bears witness to our affairs as we live according to the Christian faith.

To be faith-filled means experiencing a quiet joy.  Most Christians are happy people who show streams of gladness to those they meet.  They sing praises, shine forth their light, and are excited about life.  Being touched by the supernatural hand of God they have lives of abundance goodness.  These blessings come through prayer and perseverance.  Albert Einstein (1879–1955), a German-born theoretical physicist wrote, “The true sign of intelligence is not knowledge but imagination.”  A Christian’s belief is in this faith. He or she puts their thoughts in actions and works.  Aesop (620 BC–564 BC), an ancient Greek fabulist said, “Gratitude is the sign of noble souls.”  Holy people live by always giving thanks, and praise to God for his blessings.

St. Teresa (1910–1997), a Roman Catholic religious missionary said, “Let us touch the dying, the poor, the lonely and the unwanted according to the graces we have received and let us not be ashamed or slow to do the humble work.”  St. Teresa and the Sisters of Charity find great joy by working with the poor.  Their mission continues to be a witness to the needy people of everyday life.  They know human frailties and are willing to do their best to relieve them.  Sisters of Charity bring dignity to forgotten people, and their main focus wasn’t only the downtrodden, but the exploited.  To them money and power are false idols, and their answer is living simply.  The distribution of material wealth to the least among them mattered greatly.  This is what they taught about compassionate living.

In performing such deeds Christians are contemplative.  Max Lucado (b. 1955), a bestselling Christian author and preacher said, “The meaning of life.  The wasted years of life.  God answers the mess of life with one word: ‘grace.’”  In the end it isn’t the dirt and squalor, deprivation, or laws, but God’s ‘grace’ that will mean everything.

Minorities and civil rights have a rather interesting history but it’s a story about our future hope.  In the 1960s the Civil Right Act was passed.  The American Congress made it possible for changes to occur in our society that were to have reaching implications.  Through this act it was possible to inspect voter registration rolls, prohibit discrimination based on race, color, religion, sex, and national origin.  It also ensured there was equity in the sale, rental, and financing of housing.

Gwendolyn Brooks (1917–2000), a poet, teacher, and the first black to win the Pulitzer Prize wrote, “When you use the term minority or minorities in reference to people, you’re telling them that they’re less than somebody else.”  But with Christianity love is the greatest virtue, and there ought to be no distinctions between people of different races.

The Civil Rights Movement (1955–1968) was in full swing with the aim to abolish discrimination.  Its success was made possible through TV with images of church groups, protestors, and sympathizers.  Viewers witnessed brutality, sit-ins, freedom riders, and marches, and clashes with the National Guard impacted the national conscience.  The Black Power Movement (1968–1980) countered stereotypes about blacks, instilled dignity in the race, by pushing for economic and political parity.

In the late 1960s came the 11-member Kerner Commission appointed by President Lyndon B. Johnson in response to the riots in American cities.  A national Advisory Commission on Civil Disorders endeavored to ascertain the cause of the riots.  What would prevent future occurrences?  What was mass media’s role in the unrest and how well were blacks served?

The Kerner Commission found that the media failed in its mission to the black community.  It was believed that America was moving towards two separate and unequal societies - one white, and the other black.  The media didn’t report the underlying problems that led to the riots.  Further there was a predominant presentation of white images to the detriment of blacks.  Black culture, history and activities were ignored and media didn’t cover these issues.

America shares a common destiny.  Ron Kind (b. 1963), who served as the U.S. Representative for Wisconsin said, “For as long as the power of America’s diversity is diminished by acts of discrimination and violence against people just because they are black, Hispanic, Asian, Jewish, Muslim or gay, we still must overcome.”  America has come a long way since then.  The American culture now shows examples of black visibility by having a voice in government, business, and national affairs.  When President Barack Obama was elected to the White House some conditions changed for the better.  But blacks are still viewed disproportionally to whites as perpetrators of drug and criminal offenses.  Black leaders often criticize government and the media for their failure of not adequately pointing out police brutality.

Blacks have passed the stage of being seen as “window dressing,” as alluded in 1977 by the United States Commission for the Study of Civil Rights.  But women and minorities still have a way to go to be equal in America.  Mahatma Gandhi (1869–1948), the preeminent leader of Indian Independence Movement in British-ruled India wrote, “You must not lose faith in humanity.  Humanity is an ocean; if a few drops of the ocean are dirty, the ocean does not become dirty.”  Christians must continue to promote the goodness of all people.  America’s future depends on the gifts of every ethnic group. 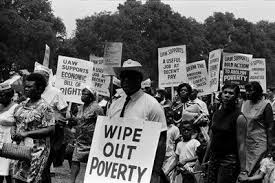 Life's Passages: From Guyana to America 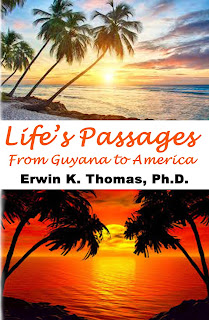 How has the Christian faith shaped my life?  Why did I pursue an education in America?   Why did I marry an American woman?  How did I get a break at CBS Network News?  Why did I become an American citizen?  How did I eventually become a professor, chair, and graduate director at an American university?  Why did I become an author?  Why am I writing Christian books in retirement?  These are some of the questions the author answers in Life’s Passages: From Guyana to America.
Life’s Passages is a spiritual biography that traces my life as a member of the Thomas’ family up to the present time.  Its theme captures the role of a loving and caring God in our lives.  Readers will journey in the local environment of a small South American country - Guyana, and explore the realities of living in America as a student and professor.

Undoubtedly, Guyanese culture helped determine who I was to become.  Social, political, and economic factors were the bedrock of the way I came to view the world.  But it’s my belief that the hand of God was at work throughout my life.  This was true from the day I was born, to my experiences in public school, colleges, and universities.

From my early days in North Road, Georgetown, I would join my siblings in prayer in our three-room home.  I mainly attended Mass at St. George’s Cathedral, Guyana, and Church of the Holy Apostles, Virginia Beach, VA.  These experiences were to have profound effects upon me.  It was however by the grace of God working in my life that I was able to have the necessary breaks to progress in these communities.

Some unexpected opportunities led to fulfillment and happiness.  I benefited from an excellent education, found wonderful jobs, was blessed with a caring family, and friends.  There were trials along the way, when my life seemed as though it was falling apart.  But, by the grace of God I was able to persevere, and overcome these setbacks.  My story therefore is one of hope, love, grace, and above all, the triumph of the human spirit.