Judge by the Cover

Overall, it was great to see Haruna come to consider Ryu as an orphan like herself. Some highlights in this novel are endearing:

• It was great that the author introduced a scene where Haruna and Ryu had to be on the same team for their class project.

• It was a surprise when Ryu was introduced living in an orphanage for wayward boys.

• The device of having Haruna's belongings crashing to the ground in Ryu's presence worked well.

• The lead in to the death of David “Wild Dog Singh” was clever.

• Allowing Ryu to overhear the criticisms of Mani that nearly led to a fist fight was well thought out.

• It was shocking to learn that Ryu had become a White Flower assassin and drove a Mazda.

• The news of the death of Singh was well handled between friends.

• It was unexpected as Haruna ended up inviting Ryu to her home while her grandmother Marie was away.

• Surprisingly Haruna and Ryu were able to work together in doing a great class presentation on the Merchant of Venice.

• Cleverly it was shown how Haruna eventually broke up with Mani.

I rather enjoyed reading this novel and it's a success dealing with “coming of age” themes. There is some violence and an occasional curse word, but it is surely geared to young adults. Parents and teachers when considering such a book will be concerned about the amount of sexual and violent incidents. However, the information about adolescent sexuality was at a minimum. The writing style is excellent and so is the characterization. I highly recommend this novel – Judge by the Cover by Melissa Abigail, to readers. The author did a superb job in her first novel of this series. 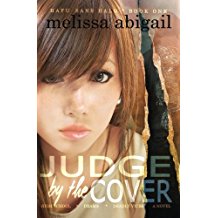